Investors and Corporations Betting Heavily on QC, with Two-Thirds of Total Investment Coming in Last Three Years, According to New BCG Report

BOSTON – Confidence that quantum computers will solve major problems that are beyond the reach of traditional computers—a milestone known as quantum advantage—has grown fast in the past twelve months, according to a new report by Boston Consulting Group (BCG), titled, What Happens When “If” Turns to “When” in Quantum Computing?

Investors are moving aggressively to increase the amount they allocate to quantum computing, with two-thirds of all equity investments in the field coming since 2018.

Through 2017, those investments totaled ~$600 million, and that amount nearly doubled over the next three years. At the same time, companies are also significantly upping their QC investment, with 20% expected to dedicate resources to quantum technology by 2023, up from just 1% in 2018, according to a recent Gartner prediction.

Jean-Francois Bobier, a BCG partner and director, and a co-author of the report, predicts the acceleration will continue.

“Recent advances and roadmaps from major hardware companies such IBM, Google, Honeywell, IonQ, PsiQuantum and others have increased the confidence that we will have machines powerful enough to tackle important business and society problems before the end of this decade. Impacted companies and governments should get prepared for an accelerated timeline,” said Bobier.

This upturn in investment is driven by major advances in quantum computing technology and predictions of massive performance and profit improvements as a result of this new capability. The BCG research estimates that quantum computing will unlock new value across many industries, creating up to $850 billion in annual value by 2040 (see exhibit). 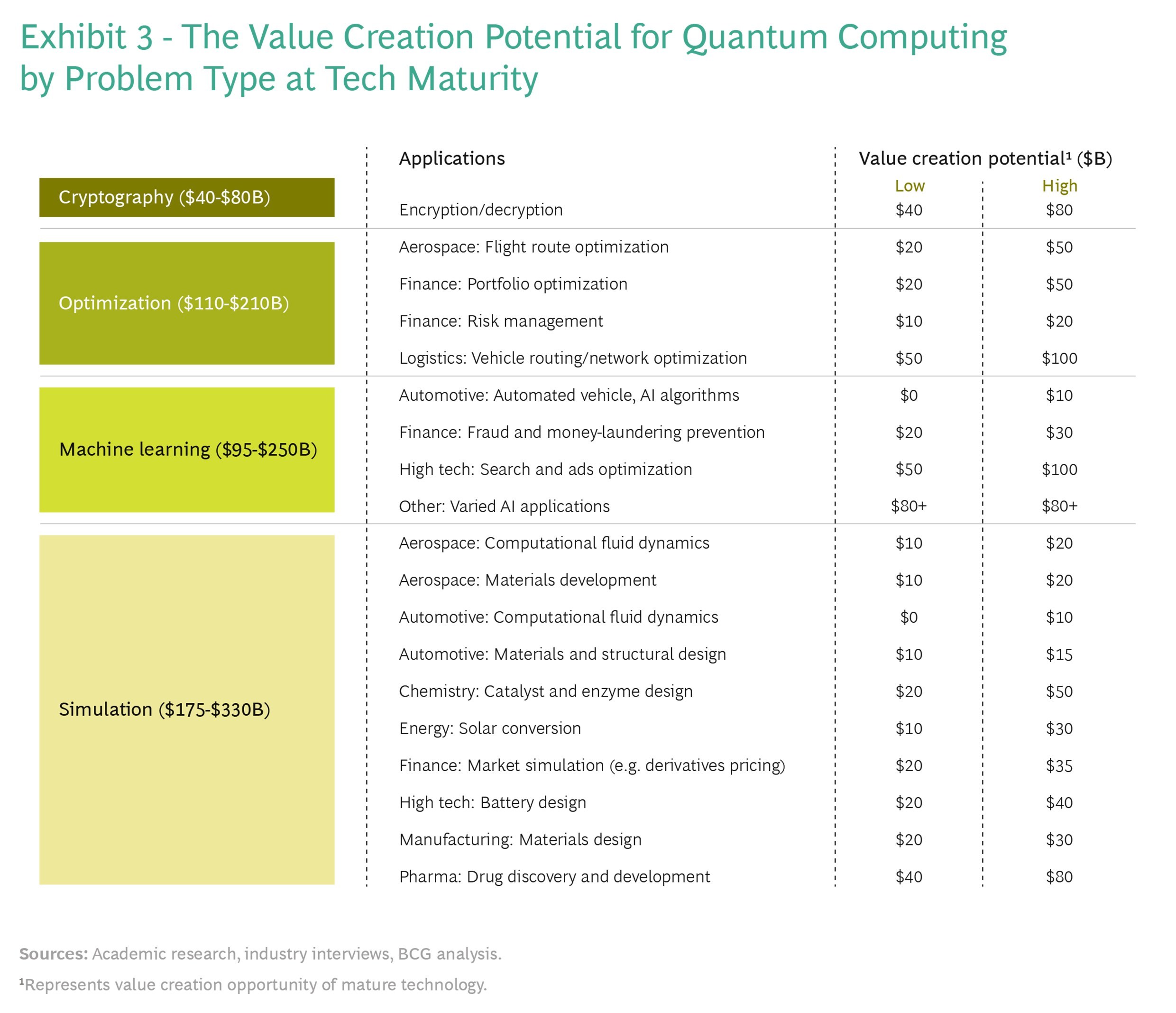 Much of the new investment is being directed toward the challenge of developing lower cost and more reliable quantum computing hardware. Researching and engineering the quantum bits (qubits) that power the computers is extremely difficult and expensive.

In 2020, a total of $675 million in equity investments flowed to quantum computing, with $528 million of that going to hardware development. The year before, the total venture capital of just $211 million was split evenly between hardware and software. BCG expects 2021 to break previous records, with more than $800 million in investments.

BCG predicts a race between five competing quantum hardware technologies over this decade. As of today, they all bear unique performance and scalability tradeoffs, and the jury is out on which ones will achieve a decisive advantage. Large, established companies such as IBM, Google, Honeywell and Amazon Web Services are heavily investing beside well-funded startups such as IonQ, which went public this year at an estimated initial valuation of $2 billion.

Matt Langione, a BCG principal and another of the report’s authors, predicted a significant surge in institutional and corporate investment in quantum technology.

“The critical change since we last surveyed the market two years ago is the rise of corporate interest and investment. That was the last domino to fall after governments and equity investors began investing heavily,” Langione said.

“Building quantum computers will require not only hardware and software innovations, but also use-case innovation: businesses will need to identify and scope high-value problems for quantum computers to tackle,” Langione added. “That is happening now, and it’s happening with vision and imagination across many industries—not just pharma and financial services, but energy and retail. Businesses of all kinds are realizing that this isn’t the kind of industry that you’ll simply be able to buy your way into once it matures.”

A copy of BCG’s report can be downloaded here.

About Boston Consulting Group
Boston Consulting Group partners with leaders in business and society to tackle their most important challenges and capture their greatest opportunities. BCG was the pioneer in business strategy when it was founded in 1963. Today, we work closely with clients to embrace a transformational approach aimed at benefiting all stakeholders—empowering organizations to grow, build sustainable competitive advantage, and drive positive societal impact.

Our diverse, global teams bring deep industry and functional expertise and a range of perspectives that question the status quo and spark change. BCG delivers solutions through leading-edge management consulting, technology and design, and corporate and digital ventures. We work in a uniquely collaborative model across the firm and throughout all levels of the client organization, fueled by the goal of helping our clients thrive and enabling them to make the world a better place.

The Rise of China’s Globalizing Startups: A Growing Cyberthreat
Digital Museums: Elevating Your Collection and Engaging Visitors
With the world’s largest reserves of nickel and a ban on the export of nickel ore, Indonesia is positioning itself as a critical player in the EV industry
The US curbs on China’s semiconductor industry have a significant impact on the Asian semiconductor manufacturing landscape
The Immersive Experience in the Museum World
How insurers thrive in a turbulent market
Leveraging Artificial Intelligence to Drive Cost Savings and Productivity in Uncertain Times

LATYS Secures $3 Million in Funding for Groundbreaking Antenna Technology
Liminal Launches into the Future with $17.5 Million Series A2 Funding
Gradient, a company specializing in eco-friendly heating and cooling solutions, has raised $18 million in a Series A funding round
The Importance of Diversity and Inclusion in the Workplace
Sequoia Capital announces its $195 Mln dedicated seed fund

Busting the Myths of Recycling: Wishcycling and Greenwashing Explained
The Debate Continues: Is ChatGPT a Boon or a Bane for Education?
GreenTech on the Rise: Companies Invest in Sustainability Despite Global Uncertainties
Nel Hydrogen Electrolyser has received a purchase order €12 million for 40 MW of alkaline electrolyser
The use of immersive technology in museums is still in its early stages