“The events in Saudi Arabia have ratcheted up tensions in the Middle East to a new level raising concerns about supply security. While in the short term the direct physical impact on the market might be limited, this should move the market away from its bearish macroeconomic cycle and raise the risk premium in the market as funds reduce their short positions. While some commentators may call for triple digit oil prices we would suggest that the sudden change in geopolitical risk warrants not only an elimination of the $5-10/Bbl discount on bearish sentiment, but adds a potential $5-10/Bbl premium to account for now-undeniably high Middle Eastern dangers to supply and the sudden elimination of spare capacity. As such prices are likely to break out of the current $55-65/Bbl options range, to test the high $70s as currently supported by fundamentals. Price could move higher if Saudi production is confirmed to be curtailed for a more substantial period which is not our current assumption.” – Chris Midgley, Global head of Analytics, S&P Global Platts 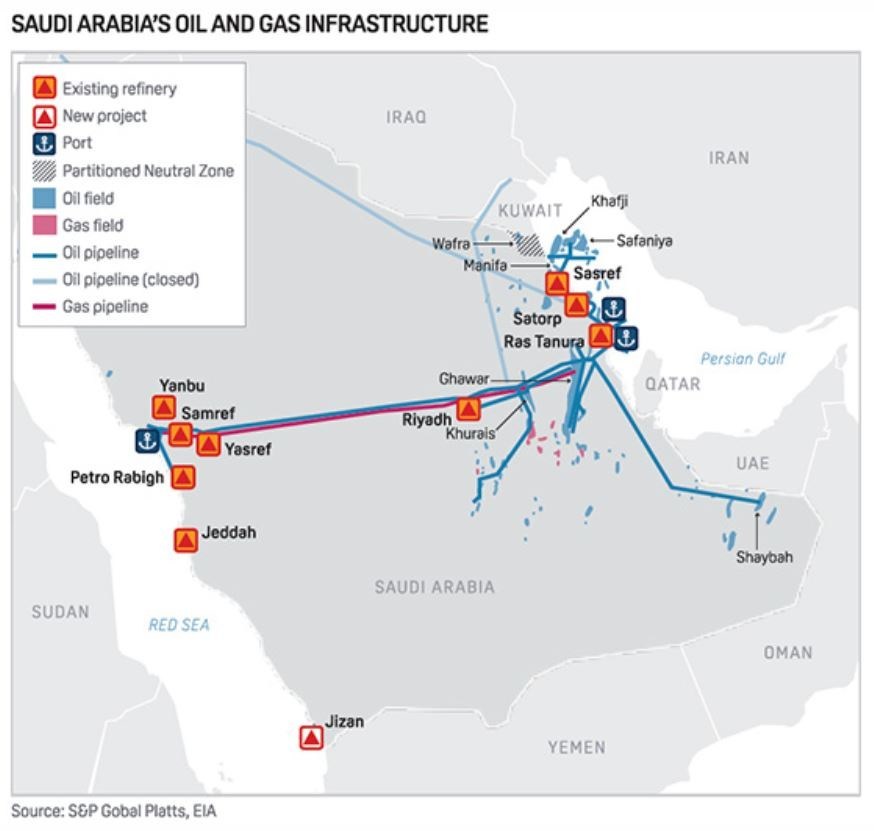 This incident signals a significant escalation by Iran-backed groups, who until now have demonstrated awareness of critical infrastructure such as the East-West pipeline and Strait of Hormuz, while limiting impact.
The timing of the attack could be significant, on a weekend, just one week after the announcement of Prince Abdulaziz as Energy Minister, fracturing of Yemeni government forces and UN accusing US, UK, and France of being complicit of war crimes in Yemen.
The reported 5 MMB/D disruption indicates an alarming level of effectiveness and sophistication, and more importantly a change in tactic towards a more direct and serious offensive.
In the short term Saudi Arabia will be able to maintain exports and use reserves to ensure supply security, but any evidence of prolonged disruption of production would heavily impact OPEC spare capacity and the ability of IEA to use Strategic Petroleum Reserves to shore up the market.
The US Administration and IEA have both raised concerns around supply security, with Secretary of State, Pompeo laying blame on Iran, which is likely to put an end to any likelihood of an agreement and return of oil from Iran in medium term.
Higher oil prices would add to the headwinds facing the global economy which could tip it into recession which would itself limit any prolonged period of excessively high oil prices as demand rebalances the market.
S&P Global Platts FACTBOX: Crude supply under threat after Saudi Abqaiq attack

The kingdom confirmed over the weekend the temporary loss of 5.7 million b/d of oil production after disruption at its facilities, but said export customers would continue to be supplied from inventories. Abqaiq is the single most important facility in Saudi’s oil industry, while Khurais is the second biggest oil field.

The attack is an escalation in severity after a number of strikes on key oil infrastructure and transit routes in the Middle East this year. Flows had been temporarily halted through Saudi Arabia’s main oil transport pipeline to terminals and refineries on the Red Sea, while oil tankers have been attacked in the Strait of Hormuz maritime chokepoint.

“The sudden change in geopolitical risk warrants not only an elimination of the $5-10/b discount on bearish sentiment, but adds a potential $5-10/b premium to account for now-undeniably high Middle Eastern dangers to supply and the sudden elimination of spare capacity,” S&P Global Platts Analytics said.

**Saudi Arabia, OPEC’s biggest and most influential member, produced 9.77 million b/d in August, according to the latest Platts survey and exports around 7 million b/d.

**Located in the kingdom’s eastern province, plants in Abqaiq process around 7 million b/d of crude.

**The Abqaiq facility is Saudi Aramco’s largest oil processing facility and processed about 50% of the company’s crude oil production in 2018.

**Khurais, about 250 km southwest of Dhahran, is the second-largest oil field in Saudi Arabia with capacity to pump around 1.5 million b/d of mainly Arab Light crude.

**Output from the 5m b/d Ghawar field, Shaybah and Khurais fields is all processed at Abqaiq.

**Saudi Arabia’s East-West Pipeline to the Red Sea has a nameplate capacity of about 5 million b/d, with current movements estimated at about 2 million b/d. The East-West pipeline runs from Abqaiq to the Yanbu Port on the Red Sea.

**Saudi Arabia ships about 10% of its total crude exports to Europe through the line to the Red Sea. The line is also critical to Saudi Arabia’s own Red Sea refineries, which are mainly supplied with crude oil produced in its eastern region shipped from the Persian Gulf.

**Saudi crude is generally a mix of heavy to medium sour oil, which is generally high in sulfur and yields a decent amount of residual fuel and vacuum gasoil.

**The oil is particularly popular with complex refineries in Asia, US and Europe which can crack heavy sulfurous crudes, and still yield distillate products due to the refiners having complex secondary units.

**Platts Analytics noted prices are likely to break out of the $55-65/b options range, more likely testing the high $70/b it previously forecast, if not higher.

**Platts Analytics added that any additional risk premium “could see prices test $80/b despite Saudi Arabia today claiming production and exports will not be significantly impacted.”

**Saudi Arabia stockpiles totaled 187.9 million barrels in June, according to the Joint Organization Data Initiative. This implies that the kingdom has 26.8 days of cover, assuming zero crude production.

**Saudi Arabia holds crude in storage in domestic tanks as well at sites in Eqypt, Japan and the Netherlands.

**The country’s largest oil export terminals are in the port of Ras Tanura which can handle about 6.5 million b/d, according to the EIA. All of Saudi’s key crude oil grades load from here along with condensate and products.

**The other key crude export terminal is the King Fahd terminal in Yanbu on the Red Sea, which has a loading capacity of 6.6 million b/d.

**Total crude oil storage capacity at the terminal is 12.5 million barrels. Only Arab Light crude oil grade is loaded at the Yanbu terminal.

**Platts Analytics estimates that global spare capacity is currently 2.3 million b/d, but more than 1.6 million b/d is in Saudi Arabia, showing how vulnerable the market is to supply-side risks.

**IEA consumer countries are required to hold emergency oil stocks equivalent to 90 days’ worth of net imports and the agency sent a note over the weekend saying oil markets remain well supplied.

About S&P Global Platts
At S&P Global Platts, we provide the insights; you make better-informed trading and business decisions with confidence. We’re the leading independent provider of information and benchmark prices for the commodities and energy markets. Customers in over 150 countries look to our expertise in news, pricing and analytics to deliver greater transparency and efficiency to markets. S&P Global Platts coverage includes oil and gas, power, petrochemicals, metals, agriculture and shipping.

S&P Global Platts is a division of S&P Global (NYSE: SPGI), which provides essential intelligence for individuals, companies and governments to make decisions with confidence. For more information, visit www.platts.com.