As we enter a new decade, CEOs are showing record levels of pessimism in the global economy, with 53% predicting a decline in the rate of economic growth in 2020. This is up from 29% in 2019 and just 5% in 2018 – the highest level of pessimism since we started asking this question in 2012. By contrast, the number of CEOs projecting a rise in the rate of economic growth dropped from 42% in 2019 to only 22% in 2020. These are some of the key findings of PwC’s 23rd survey of almost 1,600 CEOs from 83 countries across the world, launched today at the World Economic Forum Annual Meeting in Davos, Switzerland. 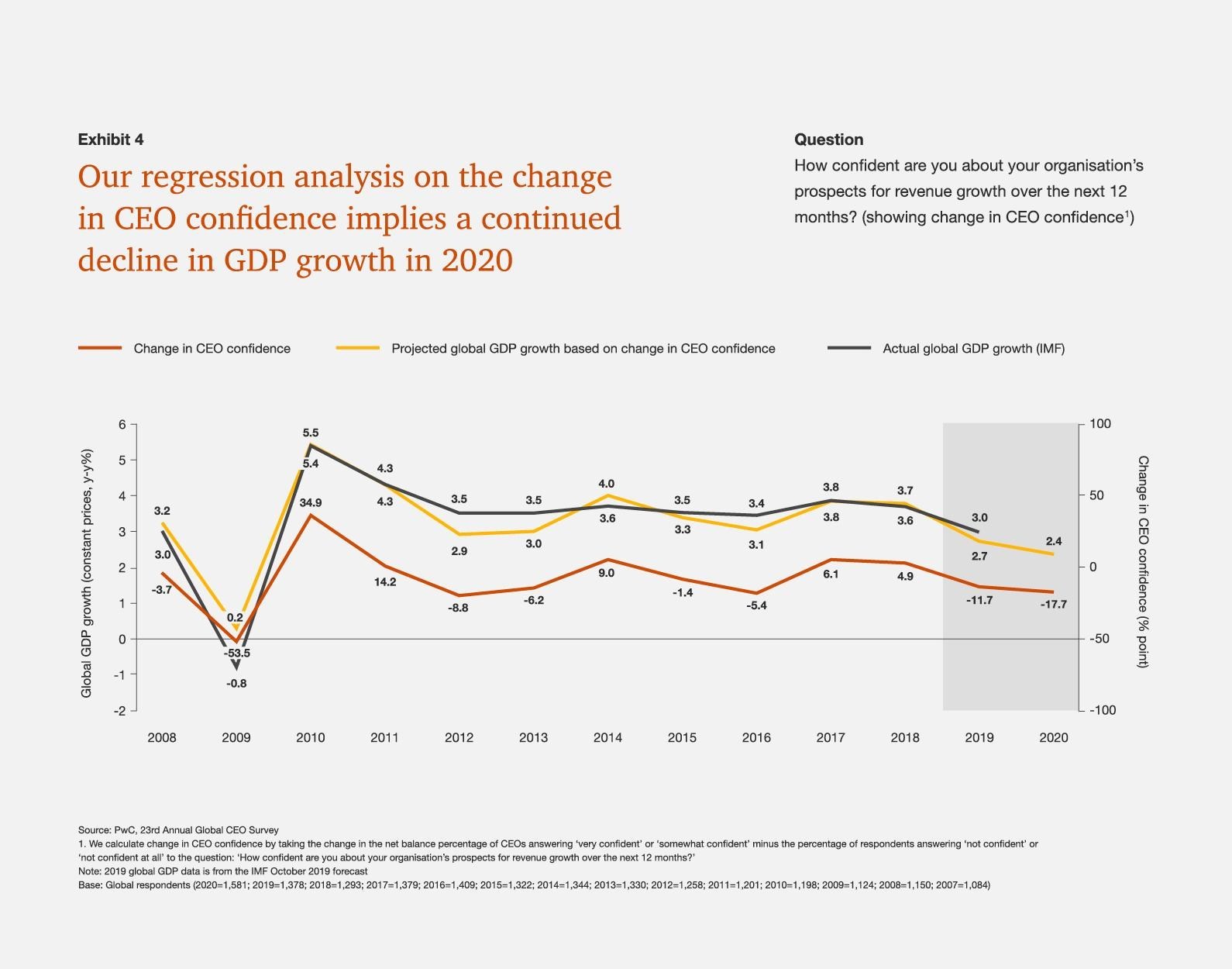 CEO pessimism over global economic growth is particularly significant in North America, Western Europe and the Middle East, with 63%, 59% and 57% of CEOs from those regions predicting lower global growth in the year ahead.

“Given the lingering uncertainty over trade tensions, geopolitical issues and the lack of agreement on how to deal with climate change, the drop in confidence in economic growth is not surprising – even if the scale of the change in mood is,” said Bob Moritz, Chairman, of the PwC Network. “These challenges facing the global economy are not new – however the scale of them and the speed at which some of them are escalating is new, the key issue for leaders gathering in Davos is: how are we going to come together to tackle them.”

“On a brighter note, while there is record pessimism amongst business leaders, there are still real opportunities out there. With an agile strategy, a sharp focus on the changing expectations of stakeholders, and the experience many have built up over the last ten years in a challenging environment, business leaders can weather an economic downturn and continue to thrive.”

CEOs are also not so positive about their own companies’ prospects for the year ahead, with only 27% of CEOs saying they are “very confident” in their own organisation’s growth over the next 12 months – the lowest level we have seen since 2009 and down from 35% last year.

While confidence levels are generally down across the world, there is a wide variation from country to country, with China and India showing the highest levels of confidence among major economies at 45% and 40% respectively, the US at 36%, Canada at 27%, the UK at 26%, Germany at 20%, France 18%, and Japan having the least optimistic CEOs with only 11% of CEOs very confident of growing revenues in 2020.

When asked about their own revenue growth prospects, the change in CEO sentiment has proven to be an excellent predictor of global economic growth. Analysing CEO forecasts since 2008, the correlation between CEO confidence in their 12-month revenue growth and the actual growth achieved by the global economy has been very close (see exhibit4 in notes). If the analysis continues to hold, global growth could slow to 2.4% in 2020 below many estimates including the 3.4% October growth prediction from the IMF.

China looks beyond the US for growth

Overall the US just retains its lead as the top market CEOs look to for growth over the next 12 months at 30%, one percentage point ahead of China at 29%. However, ongoing trade conflicts and political tensions have seriously dented the attractiveness of the US for China CEOs. In 2018, 59% of China CEOs selected the US as one of their top three growth markets, in 2020 this has dropped dramatically to just 11%. The US loss has been Australia’s gain, with 45% of China CEOs now looking to Australia as a top three key growth market compared with only 9% two years ago.

The other countries making the top five for growth are unchanged from last year – Germany (13%), India (9%) and the UK (9%). A strong result for the UK given the uncertainty created by Brexit. Australia is just outside the top five boosted by its increased attractiveness for China CEOs.

Worries about uncertain economic growth on the rise

In 2019 when asked about the top threats to their organisation’s growth prospects, uncertain economic growth ranked outside the top ten concerns for CEOs at number twelve. This year it has leapt to third place, just behind trade conflicts – another risk that has risen up the CEOs agenda – and the perennial over-regulation, which has again topped the table as the number one threat for CEOs.

CEOs are also increasingly concerned about cyber threats and climate change and environmental damage, however despite the increasing number of extreme weather events and the intensity of debate on the issue, the magnitude of other threats continues to overshadow climate change which still does not make it into the CEOs’ top ten threats to growth.

While CEOs around the world express clear concerns about the threat of over-regulation, they are also predicting significant regulatory changes in the technology sector. Globally over two-thirds of CEOs believe that governments will introduce new legislation to regulate the content on both the internet and social media and to break up dominant tech companies. A majority of CEOs (51%) also predict that governments will increasingly compel the private sector to financially compensate individuals for the personal data that they collect.

While the shortage of key skills remains a top threat to growth for CEOs and they agree that retraining/upskilling is the best way to close the skills gap, they are not making much headway in tackling the problem with only 18% of CEOs saying they have made “significant progress” in establishing an upskilling programme. This sentiment is echoed by workers. In a separate survey by PwC, 77% of 22,000 workers around the world say they would like to learn new skills or retrain but only 33% feel they have been given the opportunity to develop digital skills outside their normal duties.

“Upskilling will be one of the key issues discussed this week at Davos and business leaders, educators, government and civil society must work together to ensure that people around the world stay productively engaged in meaningful and rewarding work. Leaders have a key role to play; although people may have fears about the future, they want to learn and develop and they are looking to leaders to provide a trusted path forward,” added Bob Moritz.

Although climate change does not appear in the top ten threats to CEOs’ growth prospects, CEOs are expressing a growing appreciation of the upside of taking action to reduce their carbon footprint. Compared to a decade ago, when we last asked this question, CEOs are now twice as likely to “strongly agree” that investing in climate change initiatives will boost reputational advantage (30% in 2020 compared with 16% in 2010) and 25% of CEOs today compared with 13% in 2010 see climate change initiatives leading to new product and service opportunities for their organisation.

While views of climate change driven product and service opportunities have remained relatively stable in the US and the UK, there has been a dramatic shift in views in China over the last ten years. In 2010, only 2% of China CEOs saw climate change leading to opportunities whereas in 2020 this has risen to 47%, by far the largest increase of CEOs in any country included in the survey. However, for these opportunities to turn into long term success stories the principles of climate change need to be embedded right across a businesses’ supply chain and customer experience.

The Rise of China’s Globalizing Startups: A Growing Cyberthreat
Digital Museums: Elevating Your Collection and Engaging Visitors
With the world’s largest reserves of nickel and a ban on the export of nickel ore, Indonesia is positioning itself as a critical player in the EV industry
The US curbs on China’s semiconductor industry have a significant impact on the Asian semiconductor manufacturing landscape
The Immersive Experience in the Museum World
How insurers thrive in a turbulent market
Leveraging Artificial Intelligence to Drive Cost Savings and Productivity in Uncertain Times

LATYS Secures $3 Million in Funding for Groundbreaking Antenna Technology
Liminal Launches into the Future with $17.5 Million Series A2 Funding
Gradient, a company specializing in eco-friendly heating and cooling solutions, has raised $18 million in a Series A funding round
The Importance of Diversity and Inclusion in the Workplace
Sequoia Capital announces its $195 Mln dedicated seed fund

Busting the Myths of Recycling: Wishcycling and Greenwashing Explained
The Debate Continues: Is ChatGPT a Boon or a Bane for Education?
GreenTech on the Rise: Companies Invest in Sustainability Despite Global Uncertainties
Nel Hydrogen Electrolyser has received a purchase order €12 million for 40 MW of alkaline electrolyser
The use of immersive technology in museums is still in its early stages